The calendar of opening days until November 1st 2015, the schedule of opening and closing days, timetables and ticket prices.

The calendar of opening days until October 2014, the schedule of opening and closing days, timetables and ticket prices.

2013 Angel Flight Season starts on Sunday, April 27.
The flight schedule until September, the schedule of opening and closing of the facilities, timetables and ticket prices 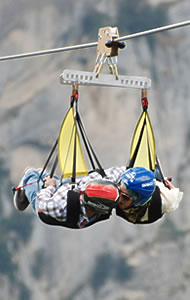 New for the 2013 season of Flight of the Angel, in Basilicata, is the descent in two.
Starting from April 27, you can choose to hover in the sky alone or in pairs.

The thrill of flying is shared in two. It’s the great news for the next season of the Angel Flight, between Castelmezzano and Pietrapertosa on the Lucan Dolomites.

Starting on the 27th April you will be able to hover in the air in pairs. Boyfriend and girlfriend. Parents and children. The friends of the heart.
The new system can fly perfectly aligned in parallel, so you can share the pleasure of adventure looking into your eyes and making the experience even more fascinating.

IMPORTANT RULES
The couple of people who carry out the flight together
may not exceed a total weight of 150 pounds.
The difference in weight between the people flying in pairs must not exceed 40 kg
For children who fly together to the parent or an adult, the minimum age allowed is 12 years.
>> Continue 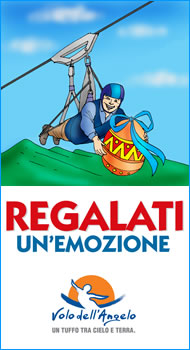 A GREAT SURPRISE INSIDE THE EASTER EGG
THE SURPRISE? A TICKET FOR THE ANGEL FLIGHT
Up to April 9, 2012 you can buy online a discount voucher to fly during the 2012 season that starts on April 29.

Experience an unusual emotion. This is the recipe for happiness, as states a study at Columbia University. The research highlights that spending money to try new emotions, rather than to purchase items, even luxury, gives more benefits and satisfactions. The emotions of life are more intense because it does not end at the time of consumption but remain in the memory you can always relive mentally and share with others.

That’s because for the next Easter, the original idea is to find inside the chocolate egg, as a surprise, a great emotion: the adventure of Angel Flight.

From 5 March to 9 April (Easter Monday) it’s possible through this web site to purchase tickets (up to a maximum of 10) at a price of 30 Euro, which are used for the Angel Flight in any of the opening days of the 2012 season which that starts on April 29. "A big saving - says Nicola Valluzzi, CEO of Angel Flight Consortium - when you consider that the cost of the ticket during the holidays is 40 euros and 35 euros on weekdays. A way to bring more people to this experience " >> Continua

The Angel Flight in the list of Italian Wonders

The Angel Flight is present in the list of the Italian Wonders of Basilicata
The initiative of the National Youth Forum to be able to vote for excellence in the country.

Partecipate and vote >> Vote for the Angel Flight

2012 Angel Flight Season starts on Sunday, April 29.
The flight schedule until September, the schedule of opening and closing of the facilities, timetables and ticket prices.