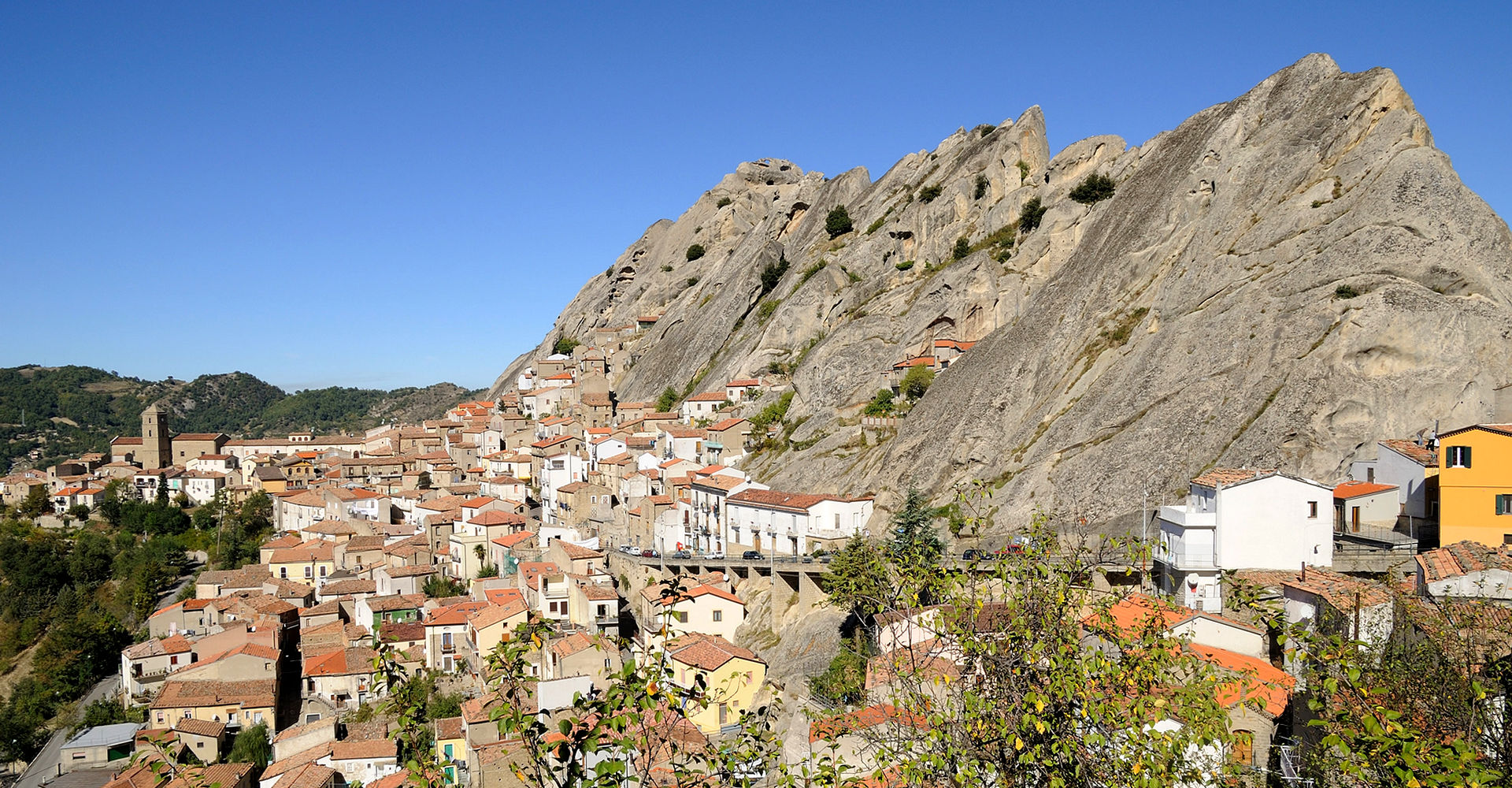 Visiting Pietrapertosa you have the feeling that everything is adjusted depending on the rock, for example the many stairs, are examples of the symbiosis between the village, its inhabitants and the rock, the living manifestation of its territory that can not deny the massive presence of nature, that must be part of the urban structure. Pietrapertosa takes its name from Petraperciata, that means"holes" for the presence of a perforated rock from side to side, and is the highest town in the Basilicata, with its altitude of 1088 meters above sea level, spread on the rocks of the Lucanian Dolomites, well protected against incursions from the valley. The character of a natural fortress and the position that dominates the Basento valley, have favored the presence of man since immemorial time.
The town’s origins are uncertain but the most reliable theories testifies to the fortification, around the fourth century b.C. by the Utiana tribes that occupied the upper and middle valley Basento. We have more reliable information from the tenth century when the fortified village was occupied by Saracens led by Chief Luke, a greek converted to Islam who made numerous raids in the neighboring towns until he was expelled by the intervention of Catapan.

The castle was later enlarged by the Normans to ensure a better defense of the place against any intruders. The fortress, which is accessed by a staircase located behind the last houses of the country, is placed directly on the rock and dominates the area of Pietrapertosa. Today, the ancient fortress shows visible portion of the perimeter wall, the entrance arch built with large blocks forming an arch, slightly lowered, a lookout tower and a few slots carved into the rock. At the top there are some steps carved directly on the rock wall, leading to an observatory with an arch formed in the sandstone. Now it seems clear that most of the work of rock excavation should be ascribed to the construction period while the northern side of the castle is an architectural elements related to the fifteenth and sixteenth centuries, the work of successive rulers.
Is strong recommended to the tourist who arrives in Pietrapertosa to visit the castle. From this place you will enjoy the spectacular landscape very hard to describe. The breathtaking view of mountains, forests, sparkling streams and rivers, hills, valleys, which alternate and overlap all around, from the top you can feel the emotion of being suspendend between heaven and earth.
A visit deserves the mother church dedicated to San Giacomo Maggiore, founded in the fifteenth century on a pre-existing factory, of exceptional artistic value. The interior, in fact, houses various testimonies of Lucanian art dating from the fifteenth to the eighteenth century. By Giovanni Luce are the two frescoes depicting the "Last Judgment" and the "Christological Series", while the two canvases with the "Beheading of the Baptist" of 1606 and a "Madonna del Carmine with Child among the SS. Giovanni Battista and Francesco ", from the same period, are by Pietro Antonio Ferro who is also credited with the painting on wood representing the" Eternal Blessing ".

During the visit of the town, going up from Via Garibaldi, the visitor’s attention is drawn to the numerous stately palaces, whose façade is marked by stone portals decorated with flowers, squares, inscriptions or emblems, which recall vanished nobility, taste for art and way of life of past centuries.
On the outskirts of the town stands the convent of S. Francesco d’Assisi, founded in 1474, full of numerous works of art. The convent complex, the result of numerous renovations carried out over the centuries, is organized around a square cloister. Close to the western side is the church with a single nave with a wooden roof with trusses and a presbytery with a square plan with a cross ceiling. The focal point of the church is the Polyptych, located on the back wall, attributed to Giovanni Luce with the Eternal, Christ in Pietà, Annunciation and Saints and the wooden statue in the aedicule depicting the Madonna delle Grazie. The same author signs the frescoes on the walls of the presbytery, made in the first thirty years of the fifteenth century, which depict the Christological cycle and episodes from the life of St. Francis. In the nave there are other works of valuable manufacture such as the fresco of the "Madonna with Child between SS. Pietro e Paolo "signed by Antonello Palumbo in 1498, the fresco of the" Madonna del Rosario between the two St. Johns "made by Nicola da Novi, and the canvases of a" S. Antonio "del Pietrafesa from 1631, and the Immaculate Conception by Francesco Guma from 1628. Upstairs there is the cantorea with the wooden choir, completely carved from the 16th century, of exceptional artistic value.