Castelmezzano is a small town in the province of Potenza, it’s among the finest treasures of Basilicata. The most attractive feature of Castelmezzano is offered by the backdrop of the Lucanian Dolomites.

Over time the rain and wind have carved the sandstone shapes to which the popular tradition has given special names, in fact, under certain conditions of light and shadows they are particulary similar to the "beak of the owl," the "snapdragon" the "anvil" and "golden eagle". The arrival in the small village is quite unusual because it can be entered through a tunnel carved into the rock after crossing a spectacular gorge. Leaving the gallery Castelmezzano looks like a small crib defended and protected by the Lucanian Dolomites. 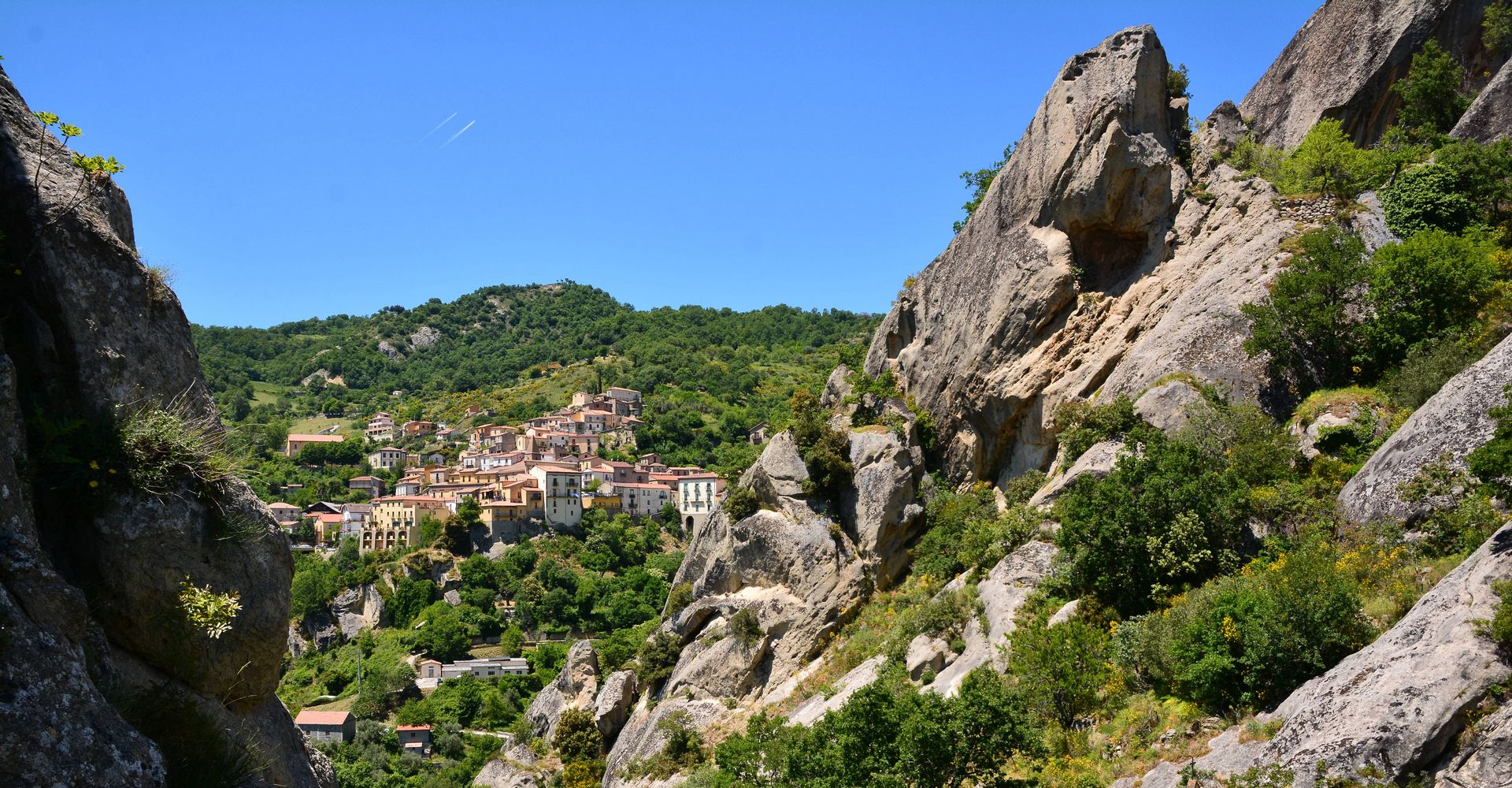 The urban structure of Castelmezzano is typically medieval: a cluster of houses with roofs concentric sandstone slabs embedded in a rocky basin. Walking through the old town is particularly attractive due to the presence of buildings included in the rock, for the many steep stairs that open up between the lanes, inviting to climb to the heights above where you can enjoy the beautiful scenery of the Dolomites of Lucania. It’s this balanced relationship of the town and the natural heritage around, respecting the surrounding landscape, tha has allowed Castelmezzano city-nature to be defined and included in the club of the most beautiful villages in Italy.
The heart of city life is Piazza Caizzo, at the center of which stands the mother church of Santa Maria dell’Olmo with its majestic Romanesque façade, covered with exposed local stone and marked by four columns and an architrave decorated with flowers, lions and two-headed eagles. In the center, a niche houses the fresco of San Rocco, protector of the town. The interior, with a single nave and four chapels, houses numerous works of high artistic value including the beautiful statue of the Madonna dell’Olmo, a high-quality wooden sculpture datable to the end of the 13th century, and still the canvas of the "Holy Family ”Signed by Giovanni De Gregorio known as Pietrafesa, a native of today’s Satriano di Lucania, one of the leading exponents of the Lucanian pictorial culture between late Mannerism and Baroque whose numerous works are scattered in the churches and convents of the region.
Going along the main street of the town, starting from the Town Hall building, you reach the ruins of the castle, probably dating back to Norman times even if the information on the origins is few and uncertain, today a part of the boundary wall, remains of raised walls, are still visible. on the rock, a cistern for the collection of meteoritic waters, and the long and steep staircase carved into the rock that leads to a probable lookout post, from where it was possible to monitor the underlying Basento river valley.
No less notable are the buildings of this small town. Starting with the Ducal Palace which belonged to the De Lerma, the last lords of Castelmezzano, which is located near the castle where the duke’s garrison resided. The palace, datable to the 18th century, has a majestic portal with large ashlars topped by a large loggia on the main façade. Palazzo Coiro, located behind the mother church and built in the nineteenth century, has various balconies supported by shelves and wrought iron railings of exquisite workmanship, the facade that opens onto the main road has a beautiful portal in local stone.
Outside the town, paths, stairways and stone bridges allow you to reach the Caperrino valley, characterized by the presence of the remains of ancient dry-built mills whose roofs are made with local stone slabs called "chiang" in the local dialect. From the valley, crossing a stone bridge with a single arch, perhaps from the Roman era, it is possible to go up and reach the nearby Pietrapertosa.
Castelmezzano with its territory is part of the Gallipoli Cognato Piccole Dolomiti Lucane Park area which offers, in addition to the unspoiled landscape beauties, traces of a millenary history due to the presence of the megalithic walls of the Lucanian settlement of Croccia Cognato of the fourth century. B.C. In the village every year in September, on the occasion of the religious celebrations in honor of S. Antonio, one of the most ancient traditions is relived: the festival of "Maggio", which represents a hymn to the fertility of the earth, through the ritual of the union of a trunk of Turkey oak and a top of holly joyfully transported from the wood to the village, the first pulled by pairs of oxen, the second on the shoulders of the young people of the village. The processional transport of the two trees is certainly the most spectacular and engaging phase that allows the crowd to become an integral part of the wedding ceremony. The party ends in the village where the top and trunk are joined, raised and climbed by the most daring inhabitants. Very similar celebrations and with the same symbolic meaning are celebrated in other neighboring centers, such as Accettura, Oliveto Lucano and Pietrapertosa.